Industry collaborates with ShipConstructor on Design for Production

ShipConstructor has recently completed a series of meetings with US shipbuilders and design firms regarding methods for enhancing Design for Production (DFP). 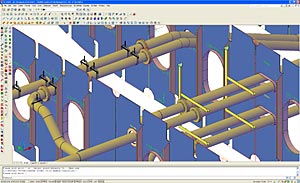 Rule-based distributed systems supports (shown in yellow) are a practical application of DFP.

“ShipConstructor’s software is widely used at US shipyards so it was natural for our industry group to collaborate with them,” says Don Sauvage of Northrop Grumman.

ShipConstructor has recently completed a series of meetings with US shipbuilders and design firms regarding methods for enhancing Design for Production (DFP).

The goal of DFP is to optimize design for efficient production so the team members identified two software functionalities as practical applications.

The first was the use of standard assemblies during the 3D modeling process. This would involve the creation of standard components that followed DFP principles. These components could then be reused anywhere within the model to ensure consistency.

The second functionality was a rule-based program for the creation of distributed systems supports. To optimize DFP, the supports for a ship’s pipes and HVAC components (distributed systems) need to be designed in a specific way depending on the system’s location, configuration and materials used. This is a complex task so a rule-based program would be of assistance.

Industry representatives have collaborated with ShipConstructor in the development of both identified functionalities which will be included in the upcoming ShipConstructor® 2008 R5 software release.

The SSI Marketing team works to share the stories that make SSI and the business of shipbuilding possible. Based in Victoria, BC, the team constantly has their ear to the ground of the latest industry and SSI news.

More posts by me

Get the latest Lighthouse posts directly in your inbox